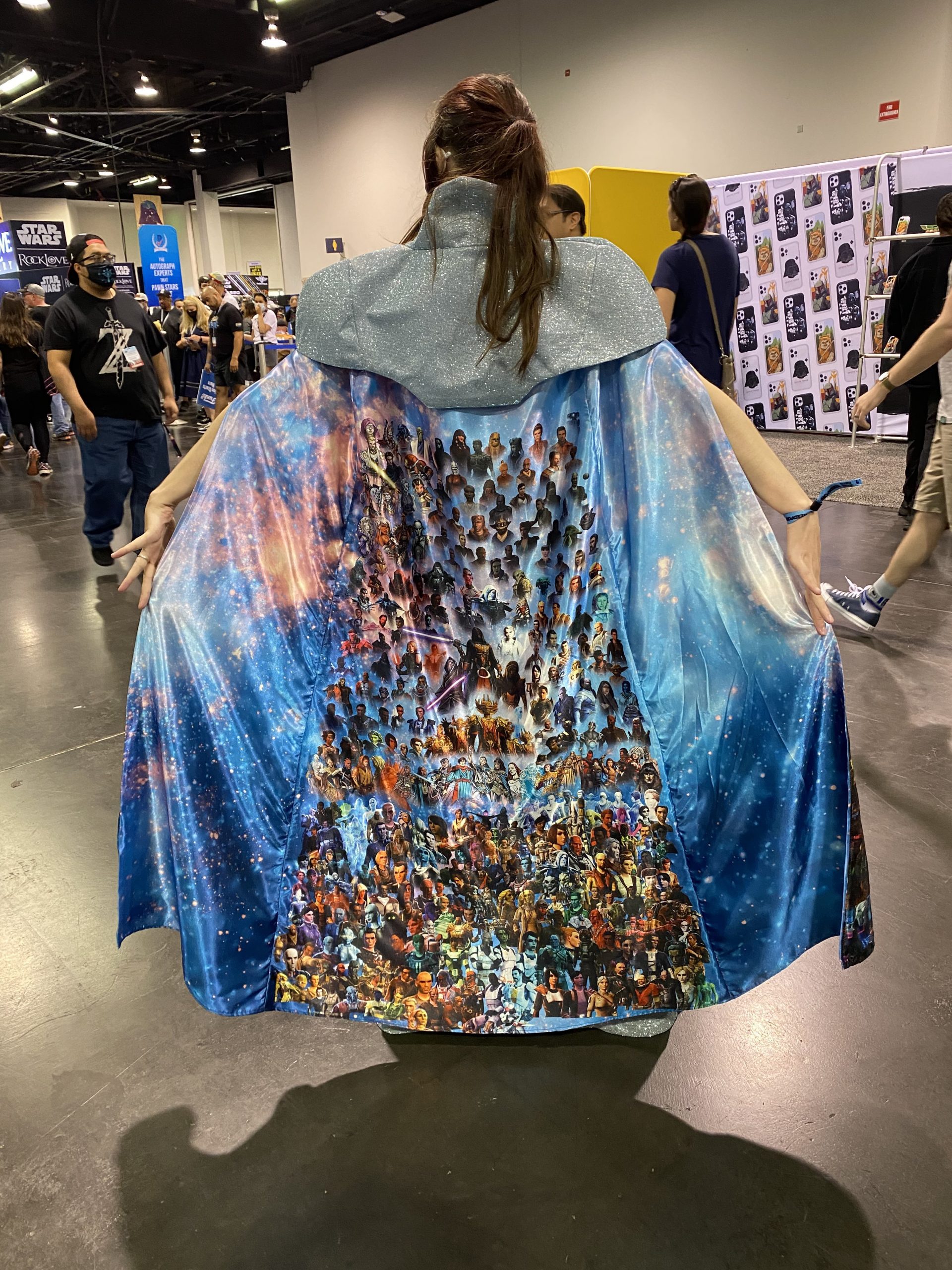 ‘The Old Republic Cape’: A love letter to the Old Republic and all its contributions to the lore of Star Wars, showing off hundreds of characters from the Old republic era, with character and image submissions from many fans and players! 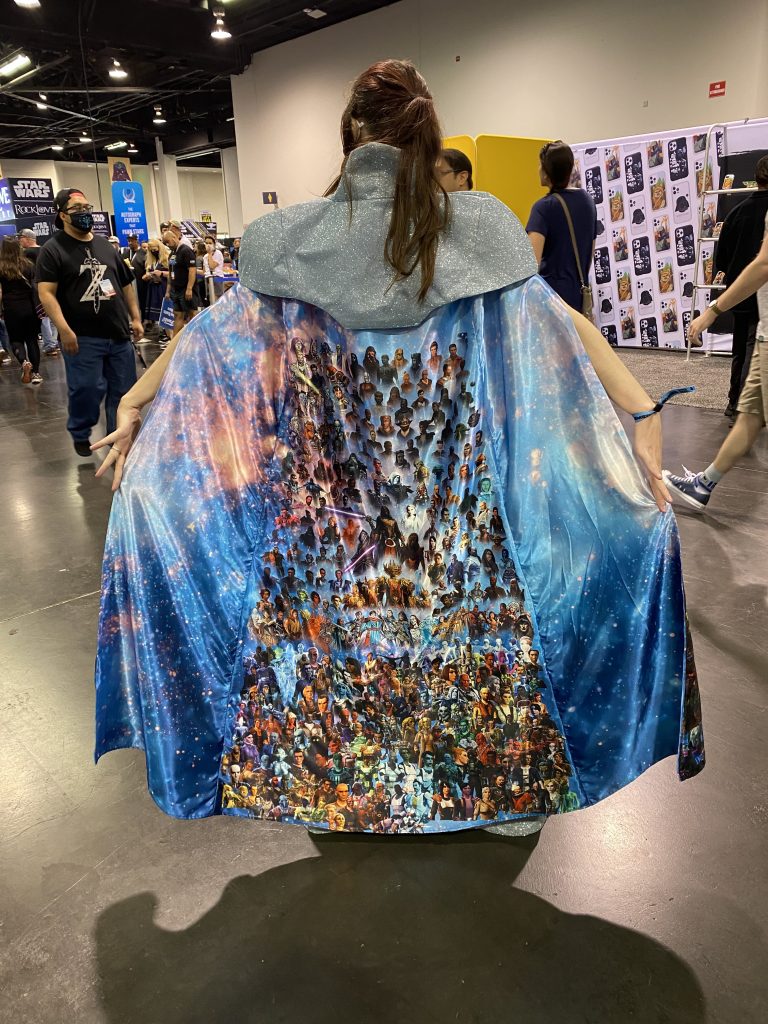 The “Old Republic Cape” was tailored by a fan of Star Wars: The Old Republic, a tailor who creates costumes and wedding wear under the name DeathStryke Couture Designs. DeathStyke has 16 years of sewing experience, 9 of which in formal and bridal (making/altering), and the other 7 were in dress making and regular garment alterations. She has created many garments from patterns, altered patterns, and created her own patterns from scratch, including this custom-fit cape and dress.

Commission a costume: If you are interested in commissioning a fabric costume/cosplay or formal dress (she can work long distance!), you can contact DeathStryke from Tumbleweed Treasures on her Instagram at @tumbleweed__treasures and her email is tumbleweed.treasures.ds@gmail.com My experience with DeathStryke was incredible – her patience and knowledge on this project was above and beyond what I was hoping for, especially as I have very little knowledge of her industry and costuming. Below are two more costumes she has made – the osft parts of a Mandalorian costume for her husband, and a completely custom Temple Guard costume for a client, as there were no existing patterns for this costume/character!

Swtorista: So my idea was for this year’s Star Wars Celebration was to create a formal dress that has literally every single main SWTOR and KOTOR character on it, to celebrate all these amazing characters, and to create a talking point with other Star Wars fans about the existence of the Old Republic era and it’s lore. My thoughts were to do all the graphics myself from screenshots sent in by the community, have the fabric custom printed, then pass it on to someone else to sew it. So what I need is help with picking a pattern and helping me figure out the panels/seam allowance sizes and shapes so I can design around them in Photoshop, figuring out fitting and resizing since I am usually too small for standard patterns, and the actual sewing part. I sewed a basic costume for last year’s so I know the basics, but both understanding patterns and the act of sewing I struggle with a lot.

DeathStryke: This sounds like an epic project! What you’re wanting is very doable. I’ve been looking a different patterns and found a couple that may work. I think a cape would be perfect to display the graphics, too.

Some of DeathStryke’s original sketches and ideas for the cape and dress.

DeathStryke: I came up with another cape option. Sorry it took awhile, holidays and then my daughter took my designs and added her own modifications. Any who, I took ideas from Qi’ra’s cape, cuz she’s a BAMF and I’d thought you might dig it. I designed it to be removable if you want to take it off for reasons. Tell me what you think! 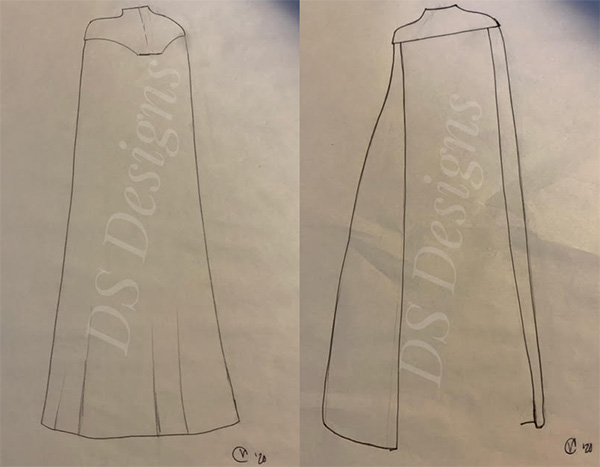 Above, The new cape design by DeathStryke. Below, Swtorista trying on the mockup of the matching dress.

Below, I started making a mockup of how I wanted the dress and cape to look. I had over a year to work on it so I was more ambitious at the time! 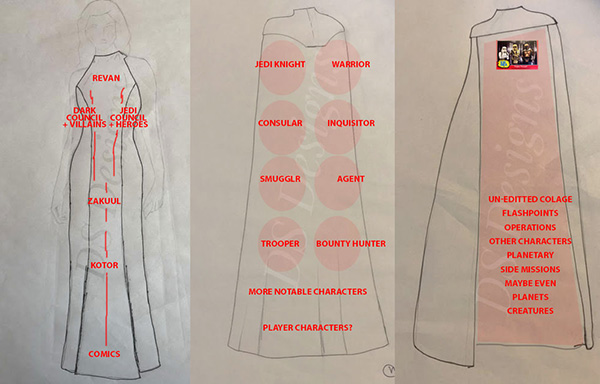 Covid changed our lives – the project had to be cancelled as Star Wars Celebration was indefinitely put off.

Swtorista: I hope you are doing well. These past year or so has been tough to get through. We finally got word that Star Wars Celebration would indeed be [running] May 26-29, 2022 dates. I was wondering if you had any interest in picking this dress project up again? If yes please let me know and I will start hustling on the art side of the things.

DeathStryke: I’ve got a serious question….. WERE YOU READING MY MIND?! I was about to email you when I saw your email. To answer your question, yes absolutely do I want to continue to work on your gown and cape (honestly, I was hoping you still wanted to do it)! Thank you so much for reaching out! Let’s get this gorgeous creation made!

DeeathStryke: I found the cape! Here’s a couple of pics of the pattern pieces not sewn but I hope you will be able to get the idea: 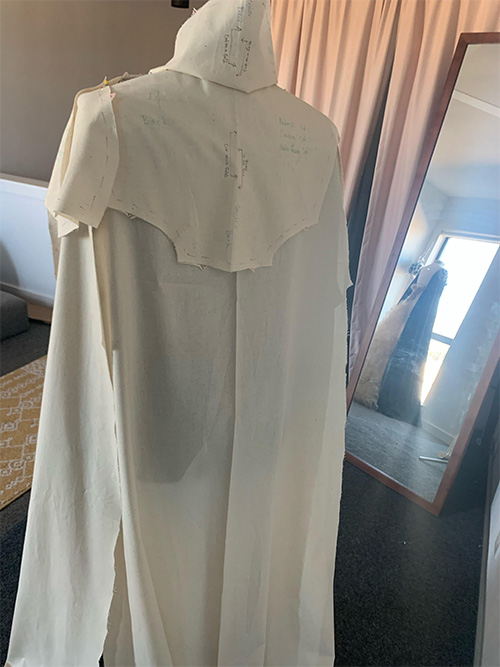 Swtorista: I started digging into all my files… I’ll need to re-do a lot of this once I have the scans but in general it might looks something like this!

Swtorista decided to instead focus on just the cape for the graphics to ensure it would get done on time. 2021/2022 has been a hard year! Below, here’s an image of her working on the cape live while chatting with other Old Republic fans. 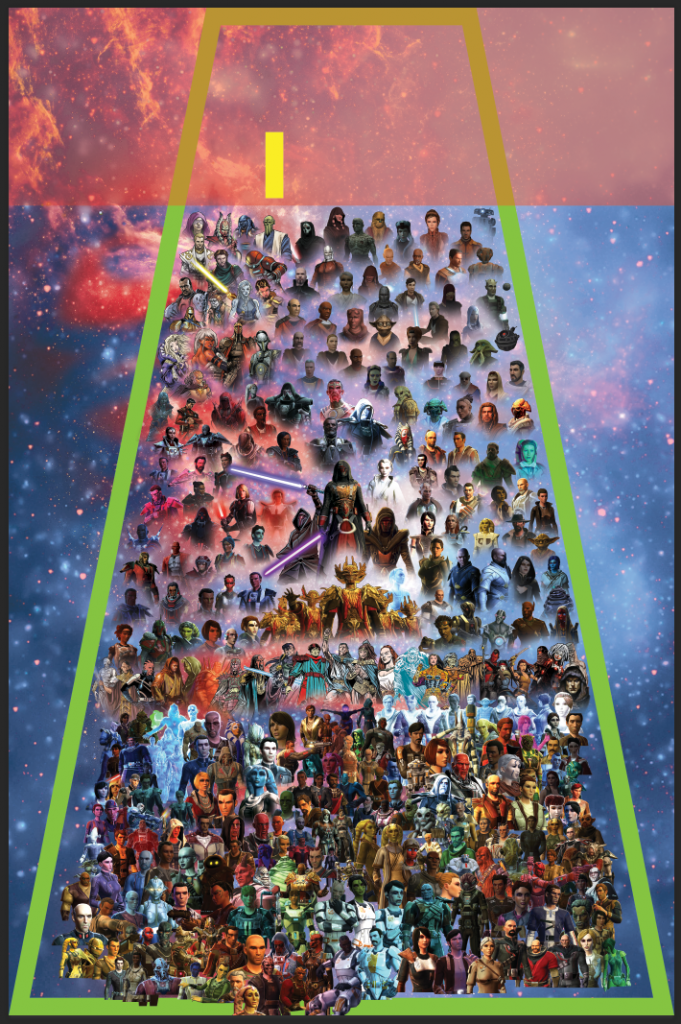 The images on this cape are taken from a wide variety of Star Wars media including:

None of these images were created specifically for this art, culture and education project, and were drawn or designed by their respective artist(s). You can easily find the artists for each piece of art by opening the cover of each of the individual works listed above for physical media like the books and comics, and in the in-game credits for the video games.

Gathering the thousands of screenshots needed for this project was no small task! It took an entire community to gather screenshots of every character e could think of that had significance, and not all of them even made it onto the cape. Swtorista created a database of characters and had ambitious players seek out the missing characters, take screenshots, and upload them to the coded database, made with basic HTML, PHP, and Javascript.

This project would not exist without their hard work both tracking down and uploading screenshots, as well as cutting out characters so they could go on the finished cape! 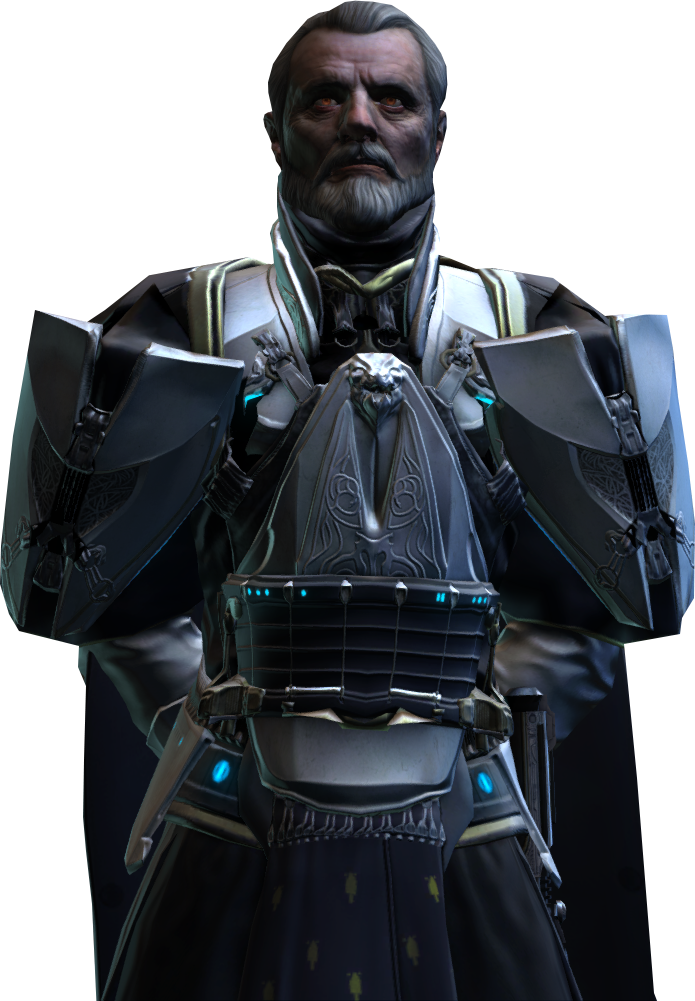 Here are some of the players who contributed, but it is by no means a completed list!

As you can see we had some players go above and beyond for this project! 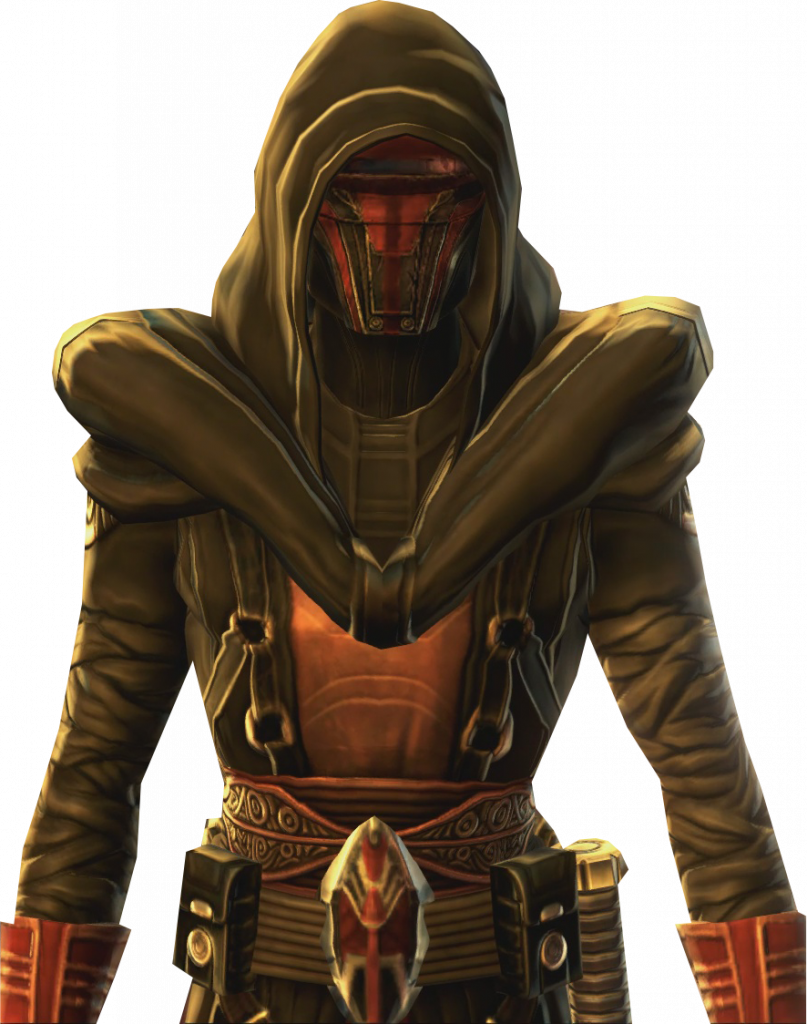 BarnabyBowell submitted over TWO THOUSAND screenshots of the games and comics and also put in a ton of work cutting out over 250 characters! This contribution freed up Swtorista’s hands to work on the other parts of the project, it would not have happened without BarnabyBowell’s help. Some other major contributors included Sutherland1P at almost 500 screenshots (wow!), RevanchistOrdo at almost 275, the lovely Raiiyavoo at 150, Sanne_Leetz at almost 150, and ShintarCommando, MilenaStardream, MagSulDeruyter, Glorfinniell, and greyias all submitted about a hundred each.